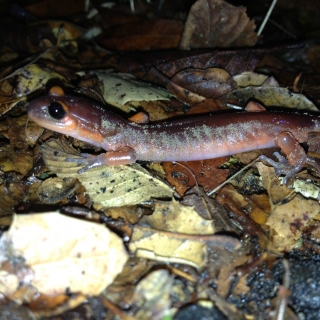 The distribution of Lyme disease in California

Lyme disease is a vector-borne disease caused by the spirochetal bacteria,Borrelia burgdorferi (Bb). It is maintained in the wild in vertebrate hosts, and transferred from host to host through feeding by ticks. Lyme disease tends to be more of a problem to humans in the eastern US than in California. Differences in the tick species (Ixodes pacificus in California, versus Ixodes scapularis in the eastern US) and the timing of the tick life cycle contribute to this difference. Our research is trying to establish the both the distribution of Lyme disease in California and the biotic and abiotic factors that influence this distribution.

While the number of cases and geographic range of LD continue to increase, the vast majority of cases are reported in the northeastern and upper Midwestern US. In contrast, despite the statewide distribution of Ixodes pacificus, the primary vector of the Lyme spirochete (Borrelia burgdorferi) in California, and suitable host communities throughout the state, the number of reported cases of LD has remained fairly constant and incidence has remained comparatively low in California. Thus, the primary objective of the lab’s research is to better understand and explain why LD is not emerging in California, and the west more generally, as it is in the eastern US. To do this requires understanding what factors drive variation in tick populations, infection prevalence of those tick populations, and human Lyme disease incidence. To this end, the Briggs lab is taking three different approaches that address questions at different scales in order to identify possible causal factors driving this variation:

Wildfires are both common and large-scale disturbances throughout the western US, and in California in particular. This project aims to quantify their effect on populations of I. pacificus as well as on populations of important host species for these ticks. In particular, tick and host populations are being sampled within and outside the burn extent of the White Fire, which took place during the last month of May, 2013 north of the Santa Ynez Mountains in Los Padres National Forest, Santa Barbara County. Tick and host densities are compared between burned and unburned sites to determine the effect of wildfire on these different species through time. All collected ticks and tissue samples are returned to the lab for analysis of infection with B. burgdorferi.

Moreover, very little research has been conducted on Lyme or other tick-borne disease systems in southern California. This, and other research ongoing in the lab represent some of the first studies quantifying infection prevalence and tick-borne disease risk in the region.

California is very heterogeneous in terms of both habitat types and climate, especially along the significant latitudinal gradient that exists within the state. This latitudinal heterogeneity may in part explain variation in tick populations and infection prevalence between regions within California. To address this question, the lab is both working in and collaborating with UC Natural Reserves from the Angelo Coast Range Reserve in Mendocino County in the north, to Dawson Los Monos Reserve in San Diego County in the south. This work includes all Santa Barbara County Reserves including Sedgwick, Coal Oil Point, Paradise, and Santa Cruz Island Reserve. In total, tick communities are being sampled, both by the lab as well as reserve staff at some of the more distant reserves, in 18 of approximately 38 UC Natural Reserves throughout the state. Ticks are being collected and returned to UCSB for identification and analysis of infection with B. burgdorferi.

The vast majority of epidemiological and ecological research on LD has been undertaken in the eastern US, which has produced a pervasive assumption that LD is primarily acquired peridomestically. However, land use and development clearly differ between regions within the US, which may influence LD risk factors and change the epidemiology of the disease. In a preliminary GIS-based statistical analysis of national level public data on LD incidence, land use and human development patterns, we show that humans are responding to LD risk through settlement decisions1. This result casts doubt on previous epidemiological studies of the relationship between land use and disease incidence and defines a way forward for future analyses determining the relative contribution of peridomestic and recreational risk to disease incidence in California, as well as differences in Lyme epidemiology between endemic regions in the US. This work is in collaboration with Dr. Andrew Plantinga, a land use economist in UCSB’s Bren School, Ashley Larsen, an EEMB graduate student, and the California Department of Public Health on data acquisition and analysis for this project.

This work will expand to additional infectious diseases, including West Nile virus and rabies, in order to better understand the importance of the feedbacks between human behavioral responses to disease risk, and the ecology of the disease more generally.

Probably the largest factor leading to the low prevalence of Lyme disease in California, however, is the difference in the vertebrate host community in the different areas. In California, one of the best reservoir species for Bb is dusky-footed woodrats (Neotoma fuscipes), but a large fraction of the larval and nymphal ticks are fed instead by western fence lizards, Sceloporus occidentalis. Rather than acting as a host for Bb, these lizards have the ability to cleanse ticks of Bb infection. That is, any tick that is infected when it starts to feed on Sceloporus is uninfected when it detaches. We are developing and parameterizing models to quantify how the relative abundance of lizards, woodrats, and other vertebrate species in an area influences the prevalence of Lyme disease. The next step is to test the models through perturbing the system to determine if the system responds in the way predicted by models. That is where Sudden Oak Death comes in: we are using the changes to the forest community caused by Sudden Oak Death as a large-scale perturbation.

Sudden Sudden Oak Death (SOD), an introduced disease that is sweeping through California’s oak woodlands and destroying dominant tree species such as Coast live oak (Quercus agrifolia) and tanoak (Lithocarpus densiflorans). SOD is caused by an introduced pathogen, Phytophthora ramorum and has the potential to impact local acorn production, leaf litter production and change the abiotic environment for the associated animal community.

Collaborators on this Project

Interested in using empirical & theoretical frameworks to understand the ecology and evolution of vector-borne diseases in a changing climate.