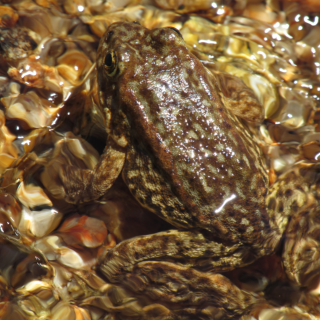 One of the main research questions of our lab is how disease effects population and community dynamics. To answer many of these questions, we study the effects of the potentially highly-lethal fungus, Batrachochytrium dendrobatidis (Bd) on California amphibian populations and the communities in which they live.

In this project we are investigating the factors that allow for persistence of populations of mountain yellow-legged frogs, Rana muscosa, in the presence of a potentially highly-lethal fungus, Batrachochytrium dendrobatidis and community-level consequences of disease-driven R. muscosa extirpations.

Mountain yellow-legged frogs were once extremely abundant in the high elevation regions of the California Sierra Nevada. Now they are on the endangered species list. Although a number of factors (including introduced trout and chemical contaminants) have contributed to the decline of this species over the past century, the disease chytridiomycosis, caused by the chytrid fungus, Bd, has resulted in population crashes and local extinction of a large number of populations over the last decade.

However, in some regions of the Sierra, small infected populations of R. muscosa are apparently persisting with B. dendrobatidis. We are using a combination of field surveys, experiments, genetic and molecular techniques, and mathematical modeling to try to understand how some frog populations are able to persist with this pathogen while other populations are driven rapidly to extinction. Moreover, we are interested in the effects of frog extirpation on macroinvertebrate and diatom communities.

One of the fundamental challenges facing contemporary disease ecology involves understanding infection dynamics within complex communities composed of multiple hosts and multiple pathogens. While research has traditionally focused on interactions between single hosts and single pathogens, hosts in nature are exposed to a ‘cocktail’ of different pathogens. A central question therefore concerns how interactions between co-occurring pathogens affect disease severity and pathogen transmission in host communities. Despite mounting interest in coinfections, most research to date has been focused at a single level, examining either how multiple infections influence individual host pathology or using population surveys to identify correlations in pathogen co-occurrence within a host population. This ‘disconnect’ in scales (i.e., within-host vs. between- host) omits a critically important question – namely, how do pathogen interactions within hosts ‘scale up’ to influence between-host processes, such as transmission and disease dynamics? The primary goal of this project is to understand how interactions among three virulent pathogens at different scales of biological complexity, including within hosts, between species, and among communities, combine to influence disease dynamics in amphibians.

This project combines cross-sectional field surveys of wetland communities in Northern California with controlled laboratory and mesocosm experiments to determine (1) how amphibian pathogens covary in occurrence and intensity across multiple spatial scales (individual hosts, host species, wetland communities), (2) the individual and combined effects of each pathogen on host pathology and pathogen infection success, and (3) the net effects of variation in host and pathogen community structure for pathogen transmission and host-pathogen dynamics. We are using a stochastic, simulation-based modeling framework uniquely focused on individual hosts to interpret experimental results and link field distributions of pathogens with underlying mechanisms. There models allow us to investigation of the long-term, population-level consequences of coinfection across a range of spatial and temporal scales, which will advance the conceptual understanding of disease dynamics. This project focuses on three pathogens that have been widely implicated in causing amphibian pathology: the chytrid fungus Batrachochytrium dendrobatidis, the trematode Ribeiroia ondatrae, and the viral genus Ranavirus.

Graduate Students Working on this Project

Collaborators on this Project