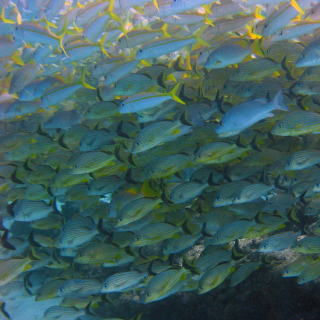 Consumers are significant links in biogeochemical cycles, recycling nutrients back to the environment via excretion and making limiting nutrients available to primary producers. On many coral reefs, fishes such as grunts and snappers often make nightly migrations into adjacent habitats such as seagrass beds and sand plains to feed on small fishes and invertebrates. These fishes then return to the reef at dawn and shelter around coral heads where they excrete large amounts of nitrogen and phosphorus. Our surveys of forereefs across the Florida Keys, a low coral-cover ecosystem, combined with bioenergetics modeling of fish excretion rates show that the input of nitrogen from fishes is up to 25X greater than all other sources of nitrogen on these reefs combined (e.g. N-fixation, atmospheric N-deposition). Consequently, these fish-derived nutrients facilitate cover of macroalgae and suppress density of juvenile corals via competition with macroalgae. Therefore, on the reef-wide scale, the input of limiting nutrients by fishes stimulates algal primary production in the absence of high coral cover with negative consequences for coral recovery.

However, aggregations of fishes can generate significant within-reef heterogeneity in nutrient dynamics and benthic communities. Our most recent work shows that coral heads that have predictable concentrations of fishes sheltering on them have higher nutrient input and coral growth rates, likely due to the direct benefit of fish excretion of coral growth. But these ‘nutrient hotspots’ created by fishes also have lower macroalgal cover than surrounding areas as herbivores concentrate their feeding on the nutrient enriched algae around these coral heads. Thus, these nutrient hotspots alter benthic communities via changes in herbivore foraging behavior.