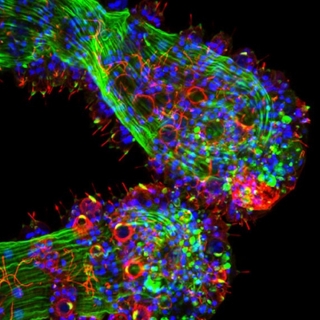 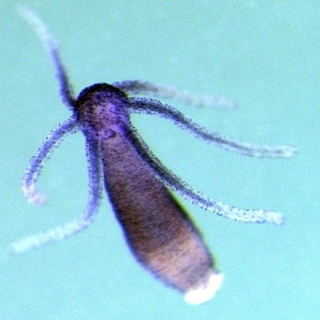 What good is half an eye? Evolutionary biologists studying the origins of vision get that question a lot, and new research out of UC Santa Barbara points to a possible answer. Findings appearing today in the journal BMC Biology indicate that, even in the absence of eyes altogether, some creatures display a light-sensitivity that uses the same visual pathway that allows humans to see.

Todd Oakley, professor in UCSB's Department of Ecology, Evolution, and Marine Biology, co-authored the paper about the genetic behavior of hydra, a freshwater polyp. Along with jellyfish, sea anemones, and corals, hydra are part of the animal family Cnidaria, who use stinging cells, or cnidocytes, to catch prey. Hydra tentacles contain barbed, poison-containing cnidocytes that they use to stun animals, such as water fleas and plankton, before eating them alive. They also use their cnidocytes for self-defense and locomotion.

The research conducted at UCSB revealed that light, or the lack thereof, has a direct effect on hydras' propensity to fire their stinging cells –– a discovery Oakley said "tells us something completely new about the biology of these animals, and we think this could extend to other cnidarians."

"Hydra stinging cells were already known to be touch sensitive and taste sensitive, but no one had ever thought before to look for light sensitivity –– probably because they don't have eyes," Oakley said. "We're the first to have found that. And we found not only that light-sensitivity genes are expressed near hydra stinging cells, but that under different light conditions, these cells have different propensities to be fired."

Studying the hydra in both bright and dim conditions, the researchers discovered that bright light actually inhibits the firing of the stinging cells –– possibly because their prey are more active at dusk and after sunset, said Oakley. He suggested that light could be acting as "a daily, rhythmic cue" that tells hydra when, and when not, to sting.

The research found that the light-sensitive protein opsin in sensory cells regulates the firing of the hydra's harpoon-like cnidocytes. These same cells are found in the mechanisms hydra use to grasp prey, and to summersault through the water.

The linking of opsin to the stinging cells helps explain how hydra can respond to light despite the absence of eyes, the scientists said, because the sensory neurons also contain the ion channels and additional proteins required for phototransduction –– the process by which light is converted to electric signals. Phototransduction in humans occurs in the retina.

"I wouldn't call this vision, because as far as we know the hydra are not processing information beyond what's light and what's dark, and vision is much more complicated than that. But these genes that we're studying are the keystones of vision," Oakley said. "For us, as evolutionists, the message is that photoreception can do other things besides just facilitate vision. It can do unexpected things. What good is half an eye? Even without eyes there are other functions for light sensitivity that we may not be thinking of."

Oakley collaborated on the paper with David Plachetzki, a UCSB graduate student when the study was conducted, but now a postdoctoral fellow at UC Davis, and former UCSB undergrad Caitlin Fong.