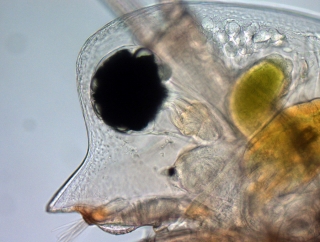 The water flea –– Daphnia pulex –– has the largest inventory of genes ever recorded for a sequenced animal, according to a new study in the journal Science by 69 co-authors. An international team effort to sequence the genome of the water flea included work by UC Santa Barbara biologists.

Daphnia is the first crustacean to have its genome sequenced. The study found that it contains more than 31,000 genes. By comparison, humans have only about 23,000 genes.

"We were surprised to find the incredibly high level of complexity of the set of Daphnia vision genes," said co-author Todd Oakley, associate professor in UCSB's Department of Ecology, Evolution and Marine Biology.