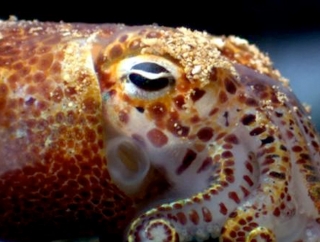 Scientists have found that a small Hawaiian squid can hide itself by using an organ with the same genes found in its eye.

Using a process called bioluminescence, the squid can light up its underside to match the surrounding light from the sun. This disguises the squid in much the same way that it discharges black ink to cloak itself. The study was recently reported in the Proceedings of the National Academies of Science.

The squid, commonly called Hawaiian Bobtail squid, has a light organ that is totally separate from the eyes. The new finding is that this organ is light sensitive and uses some of the same genes as the squid's eye.