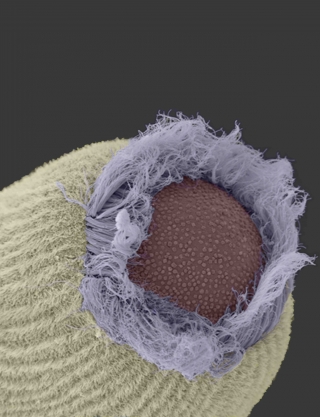 Our research was summarized in Nature magazine.

Here is how they put it: "Sponge larvae can detect light despite lacking a nervous system or the photosensitive 'opsin' proteins found in all other known animal eyes. Instead, another pigment called cryptochrome may underlie the light-sensing ability of the sponge Amphimedon queenslandica (pictured), report Todd Oakley at the University of California, Santa Barbara, and his colleagues.

Cryptochromes mainly absorb blue light and, in other animals, have been implicated in functions from setting circadian rhythms to sensing magnetic fields. The authors identified two cryptochrome genes in the sponge. One, Aq-Cry2, is expressed in the 'ring eyes' of A. queenslandica larvae and has an absorbance peak similar to the wavelengths that trigger larval activity.

Because eye evolution in other animals has always involved opsins, the use of cryptochrome represents a separate lineage of eye evolution, the team suggests."