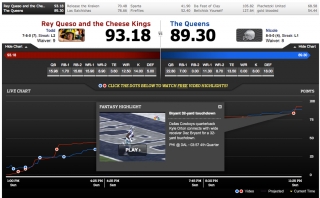 Rey Queso and the Cheese Kings (Todd) got 15.98 points from Andrew Luck and 15.90 from Dez Bryant  to take down The Queens (Nicole), 93.18 - 89.30 in the First Championship of the Oakley Lab Fantasy Football challenge.

The Cheese Kings had a small 9.38-point lead going into the final NFL game of the day. The Queens had Jason Witten and DeMarco Murray in the last game, while The Cheese Kings had Dez Bryant. Powered by Witten's big day, The Queens took the lead. But a Fourth Down touchdown strike to Dez Bryant late in the fourth quarter propelled Rey Queso and the Cheesekings to victory in the first Title match ever (Los Chupacabras League).

Cheese Kings owner, Todd Oakley said "It was a football day for the ages".  Oakley saw his beloved NFL Green Bay Packers win on a fourth down touchdown bomb from Aaron Rodgers to Randall Cobb earlier in the day over the rival Chicago Bears.

The regular season of the Los Chupacabras Fantasy League was one by Da Feat of Clay (Ian). However, DFC was upset in round 1 of the playoffs, when #8 seed Gold Blooded (Celia) got an historic 51.5 point performance from Jamaal Charles. Eventual champion Rey Queso and the Cheese Kings barely made the playoffs, landing  in seventh place with a record of 7-6. But they rode a hot streak, and lucky breaks to the title. In their semi-final game,The Cheese Kings beat Plachetzki United (Dave), 93.94 - 67.58. The week before, they edged Belichick Yourself (Emily), 121.30 - 117.32. PU defeated Release the Kraken (Sabrina), a team rocked by controversy this season in what fans are calling "Cookie Gate". Kraken allegedly purchased QB Matthew Stafford from Sparta (Marko) in exchange for homemade chocolate chip cookies. Because Kraken owner Sabrina is also league commissioner, allegations of collusion have swirled, and may have distracted the team. Then again, it was only Matthew Stafford. Las Salchichas (Dan) and Fireflies (Niko) finished fifth and ninth, respectively. Clearly cookies are more important to Sparta (tenth place) than fantasy football.