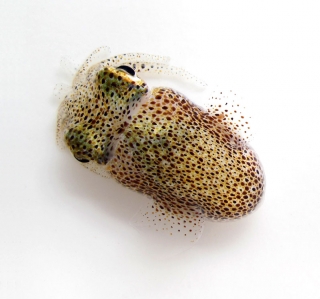 Research conducted by UCSB scientists shows that the evolution of complex bioluminescent traits may be predictable.

A longstanding question among scientists is whether evolution is predictable. A team of researchers from UC Santa Barbara may have found a preliminary answer. The genetic underpinnings of complex traits in cephalopods may in fact be predictable because they evolved in the same way in two distinct species of squid.

Last, year, UCSB professor Todd Oakley and then-Ph.D. student Sabrina Pankey profiled bioluminescent organs in two species of squid and found that while they evolved separately, they did so in a remarkably similar manner. Their findings are published today in the Proceedings of the National Academy of Science.

Oakley, professor and vice chair of UCSB’s Department of Ecology, Evolution and Marine Biology, and Pankey, now a postdoctoral scholar at the University of New Hampshire, leveraged advances in sequencing technology and cutting-edge genomic tools to test predictability in the evolution of biological light production.

They chose to work with the Hawaiian bobtail squid (Euprymna scolopes) and the swordtip squid (Uroteuthis edulis), a Japanese species used for sushi. These distantly related species are two of five genera known to have bioluminescent organs called photophores. The photophores contain symbiotic, light-emitting bacteria, and the squid are capable of controlling the aperture of their organ to modulate how much light is produced.

The scientists wanted to know how similar the two species’ photophores are in terms of their genetic makeup. To find the answer, they sequenced all of the genes expressed in these light organs, something that could not be done using older sequencing technology.

“They are much more similar than we expected in terms of their genetic makeup,” Oakley said. “Usually when two complicated organs evolve separately we would expect them to take very different evolutionary paths to arrive where they are today. The unexpectedly similar genetic makeup demonstrates that these two squid species took very similar paths to evolve these traits.”

More specifically, the researchers demonstrated that bioluminescent organs originated repeatedly during squid evolution and then showed that the global gene expression profiles (transcriptomes) underlying those organs are strikingly — even predictably — similar. To confirm their hypothesis and findings, Oakley and Pankey enlisted the assistance of statisticians from the University of Washington and UCLA, who developed new statistical methods to test the idea of convergent (separately evolved) origins.

“I did find some individual genes that were counter to the main pattern, which means we can no longer study just one gene anymore in order to test these questions about the genetic basis of convergence,” said Pankey. “We’re at the point now where we need to — and can  — study all of them.”

Some previous experiments have indicated that these squid use their bioluminescent capabilities for camouflage, as counterintuitive as that may seem. “If you imagine lying on your back in the deep ocean and looking up, almost all the light comes from straight above,” Oakley explained. “There’s no structure like walls or trees to reflect the light, so if there’s something above you, it’s going to cast a shadow. The squid can produce light that then matches the light from behind them so it blocks their shadow to a viewer below, which is a type of camouflage.”

The team’s results demonstrate that the evolution of overall gene expression underlying convergent complex traits may be predictable. This finding is unexpected and could indicate unusually strong constraints: The probability of complex organs evolving multiple times with similar trajectories should be vanishingly small, noted Oakley. Yet the team’s novel bioinformatic approaches indicate the evolution of convergent phenotypes is associated with the convergent expression of thousands of genes.

“These results have broad implications for workers in the fields of evolution, genetics, genomics/bioinformatics, biomaterials, symbiosis, invertebrate zoology and evolutionary development,” Oakley concluded.