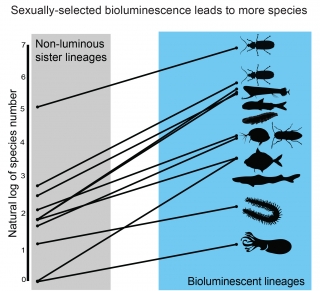 When you’re a firefly, finding “the one” can change the world.

A new study by UCSB evolutionary biologistsTodd Oakley and Emily Ellis demonstrates that for fireflies, octopuses and other animals that choose mates via bioluminescent courtship, sexual selection increases the number of species — thereby impacting global diversity. Their results appear in the journal Current Biology.

“We wanted to know why some groups have more species than others,” said corresponding author Oakley, a professor in UCSB’s Department of Ecology, Evolution, and Marine Biology. “This is a big open question and our analysis provides some of the most solid results showing that sexually selected traits like bioluminescent courtship can lead to the presence of more species in some groups. What’s more, it’s a mechanism for altering global biodiversity.”

Ellis and Oakley conducted a meta-analysis of biodiversity and evolutionary history across many different animals that use bioluminescent courtship, including fireflies, fishes and octopuses. They found 10 groups in which a bioluminescent courting species outnumbered its sister clade, the scientific term for its nearest relatives or immediate family.

“What is most surprising is that this same pattern holds across all these really diverse animal groups,” said lead author Ellis, a doctoral student in Oakley’s lab. “That’s something that makes our study unique. Most research focuses on one group — say, birds — but we’ve shown that on a global scale, these patterns tend to hold.”

Evolutionary biologists use a variety of concepts to determine new species. A common one is called the biological species concept, which is based on whether two different populations can breed with each other. If not, they’re separate species and have distinct gene pools. If two populations are breeding, they are considered one species.

According to Oakley, this is very hard to test in practice because it requires manipulative breeding experiments. “So biologists use other ways to distinguish species, such as fixed differences between the populations in some feature,” he said. “In the small crustaceans we study — ostracods — we measure their length and their height and look at their different limbs. In the bioluminescent ones, different populations have different signals. Based on all the information we gather, we decide what populations are the same species and which ones are different species.”

“In most cases, we observed more species than we expected using these background rates,” Ellis explained. “This suggests that sexual selection can lead to an increased speciation rate. However, this is a very controversial topic in evolutionary biology. Many studies have looked for this pattern and have produced very conflicting results, sometimes using the same data sets.”

Oakley noted that their results represent a correlation, meaning the variables fluctuate together. “Even though we found 10 separate times that bioluminescent species outnumbered their nonluminescent counterparts, we can’t go back and cause the evolutionary origin of a sexually selected trait,” Oakley said. “But we can test the results of evolutionary history based on different hypotheses, which is what we’ve done here.”