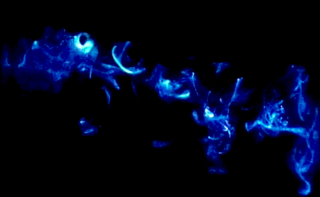 To create their entrancing light displays, cypridinid ostracods expel a bit of mucus injected with an enzyme and a reactant, and then swim away from the glowing orb to repeat the act again. The result is a trail of fading ellipses, or will-o’-the-wisps hanging in the water column. And the length of each of these pulses is a major component of the courtship display. Some are quick like an old-fashioned flashbulb, said Hensley, while others linger in the water.

In a classic scenario, you’d expect to find a clear correlation between how long the flash lasts and the structure of the enzyme responsible for it, said Hensley. “And that’s true for some of the species, but it’s not true for all of the species.”

Instead, Hensley and his colleagues discovered that two mechanisms influence the duration of the light pulses. An animal using enzymes with a slower reaction rate will create a longer glow, but so too will one that spits out a greater amount of reactant, which takes the enzymes longer to exhaust. Both of these are at play in different combinations across the different species.

“That was one of the surprising results we got out of our paper,” said Hensley. The team’s findings appear in the Royal Society journal Proceedings B.