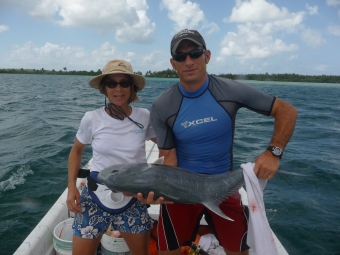 Marine scientists have long known that some species of fish possess a unique physiological characteristic — a web of arteries and veins lying very close together — that enables them to raise their internal temperatures higher than that of the water surrounding them.

Now, a new study by an international team of scientists that includes UC Santa Barbara research biologist Jenn Caselle has demonstrated that species possessing the ability to warm their core — a process called endothermy — are able to swim two and a half times faster than those whose body temperature doesn’t change. In addition, these species, which include some sharks and tunas, can also swim twice as far — ranges comparable to those of warm-blooded animals such as penguins and other marine mammals. The researchers’ findings appear in the Proceedings of the National Academy of Sciences.