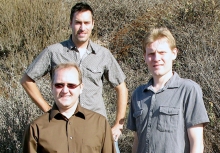 Current Mass Extinction Spurs Major Study of Which Plants to Save

The Earth is in the midst of the sixth mass extinction of both plants and animals, with nearly 50 percent of all species disappearing, scientists say.

Because of the current crisis, biologists at UC Santa Barbara are working day and night to determine which species must be saved. Their international study of grassland ecosystems, with flowering plants, is published this week in the Proceedings of the National Academy of Sciences. 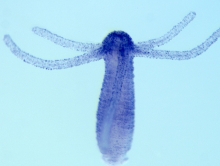 By peering deep into evolutionary history, scientists at the University of California, Santa Barbara have discovered the origins of photosensitivity in animals.

The findings are published in this week's issue of the scientific journal PLoS ONE. The scientists studied the aquatic animal Hydra, a member of Cnidaria, which are animals that have existed for hundreds of millions of years. The authors are the first scientists to look at light-receptive genes in cnidarians, an ancient class of animals that includes corals, jellyfish, and sea anemones.

Scientists at the University of California, Santa Barbara have discovered significant clues to the evolutionary origins of the nervous system by studying the genome of a sea sponge, a member of a group considered to be among the most ancient of all animals.

The findings are published in the June 6 issue of the journal PLoS ONE, a Public Library of Science journal. The article can be found at http://www.plosone.org/article/info:doi/10.1371/journal.pone.0000506.

The Faculty Early Career Development (CAREER) Program offers the National Science Foundation's most prestigious awards in support of the early career development activities of those teacher-scholars who are most likely to become the academic leaders of the 21st century.