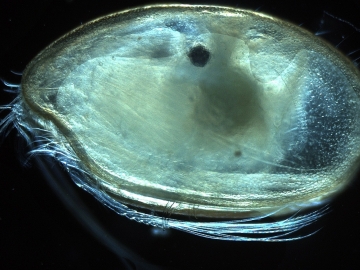 Duplication and divergence of genes and genetic networks is hypothesized to be a major driver of the evolution of complexity and novel features. We are interested in examining the history of genes, genetic networks, and development in the context of eye evolution by using new approaches to understand patterns of gene duplication and gene expression during the evolution of animal genomes. Namely, the history of eyes can be understood in part as a composite history of the components expressed there, and current technology now allows large-scale analyses of gene expression, even in non-model organisms.

Because crustaceans have the largest diversity of morphological types of eyes, and much variation between species, they are a focus of our lab for connecting genotype and phenotype in macroevolution. We constructed the first molecular phylogeny of Ostracoda, which supported the hypothesis that compound eyes of ostracods are not phylogenetically homologous with those of other arthropods. We are now analyzing the genetic components of those compound eyes to test hypotheses about their origins. Some ostracods are even sexually dimorphic, where only males have compound eyes. To support this work on ostracod eye evolution, an ongoing goal is to generate a robust phylogeny of Ostracoda and relatives, complete with divergence time estimates that integrate the rich ostracod fossil record with molecular data. In addition, we are using next generation sequencing on ostracod eye transcriptomes, coupled with quantitative PCR and in situ hybridization, to connect genes and morphology.