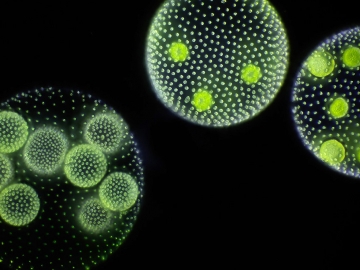 The world is characterized by a spectacular variety of life. But loss of biodiversity through extinction is one of the most pronounced forms of environmental change. Understanding how biodiversity loss will impact the productivity and sustainability of Earth's natural ecosystems is a primary goal of modern science.

The goal of this project is to identify and predict which extinction events are likely to have the greatest impacts on primary production. Primary production is perhaps the most fundamentally important biological process on the planet. It is the process by which plants and algae capture sunlight to produce energy, which ultimately becomes the source of food for nearly all higher life. It is also the process that takes CO2 out of the atmosphere and replaces it with oxygen, that produces wood and biofuel, and that sequesters pollutants from soil and water.

We hypothesize that the impacts of species extinction on primary production can be predicted if one knows the evolutionary relationships among species. We propose that evolution has led to genetic and functional differences among species, and these differences lead to a 'division of labor' that determines how efficiently groups of plants or algae capture biologically essential resources like nutrients or light. If evolution leads to species that are genetically unique, and ecologically irreplaceable, then we should be able to use our understanding of evolution to predict which species losses will have the greatest impacts on processes like primary production.

We have assembled a team of researchers that span three important fields of biological research: genomics, phylogenetics, and ecology. To test our hypothesis, we will use tools from each of these fields to understand how one of the most widespread and ecologically important groups of algae controls the productivity of lakes throughout North America. Our work is divided into three studies:

First, we plan to generate new molecular data to better understand the evolutionary relationships among the most common species of algae in North America. We will then use these data to determine whether communities of algae that live together are more genetically diverse than one would expect by random chance.

Second, we will perform complementary laboratory and field experiments in which we artificially create lakes of algae where the species differ in their evolutionary history, and therefore, their levels of genetic divergence. This will allow us to directly measure how evolutionary and genetic differences control the functional differences among species and, in turn, how these functional differences influence primary production.

Third, we plan to sequence the transcribed genes of several common algal species so that we can identify genes that make species ecologically unique (that is, identify the genes that allow species to use biologically essential resources in different ways). To relate these genetic differences to the process of primary production, we will grow species in laboratory cultures and determine which genes are turned 'on' and 'off' as species try to survive when they are forced to compete with each another.